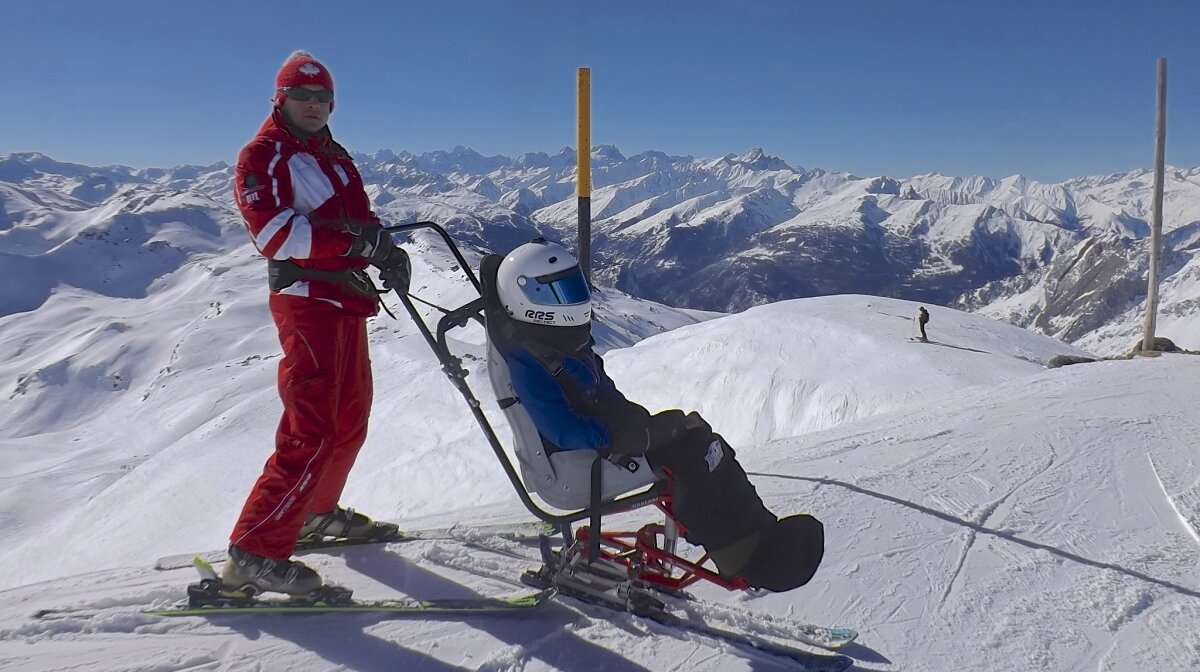 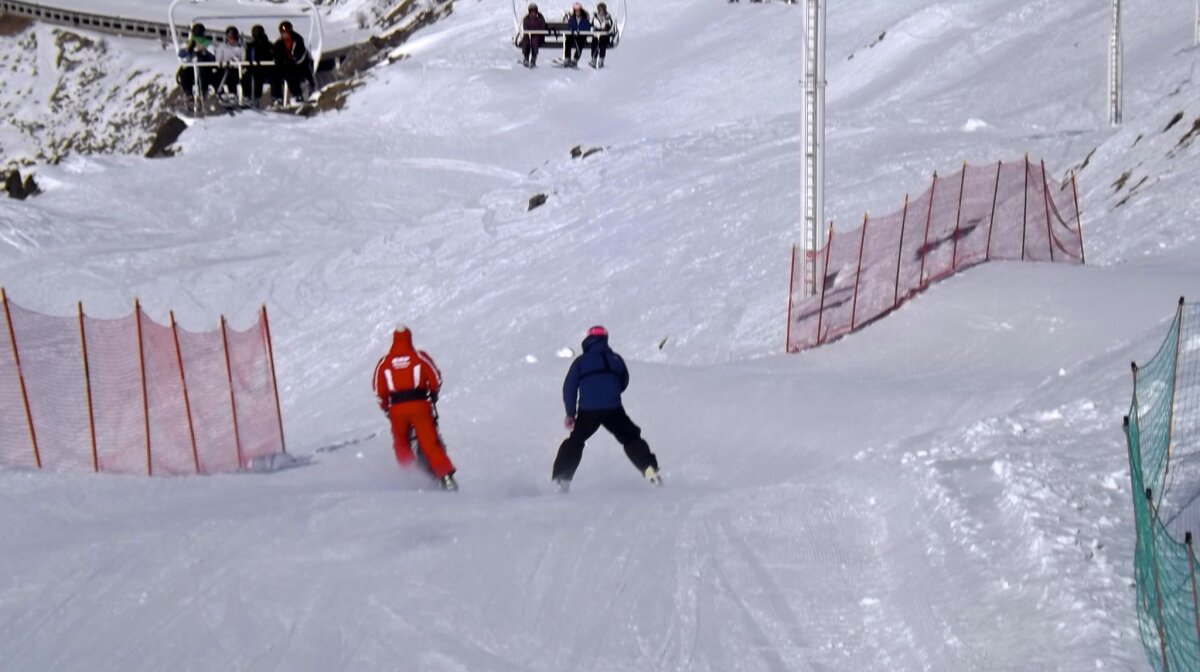 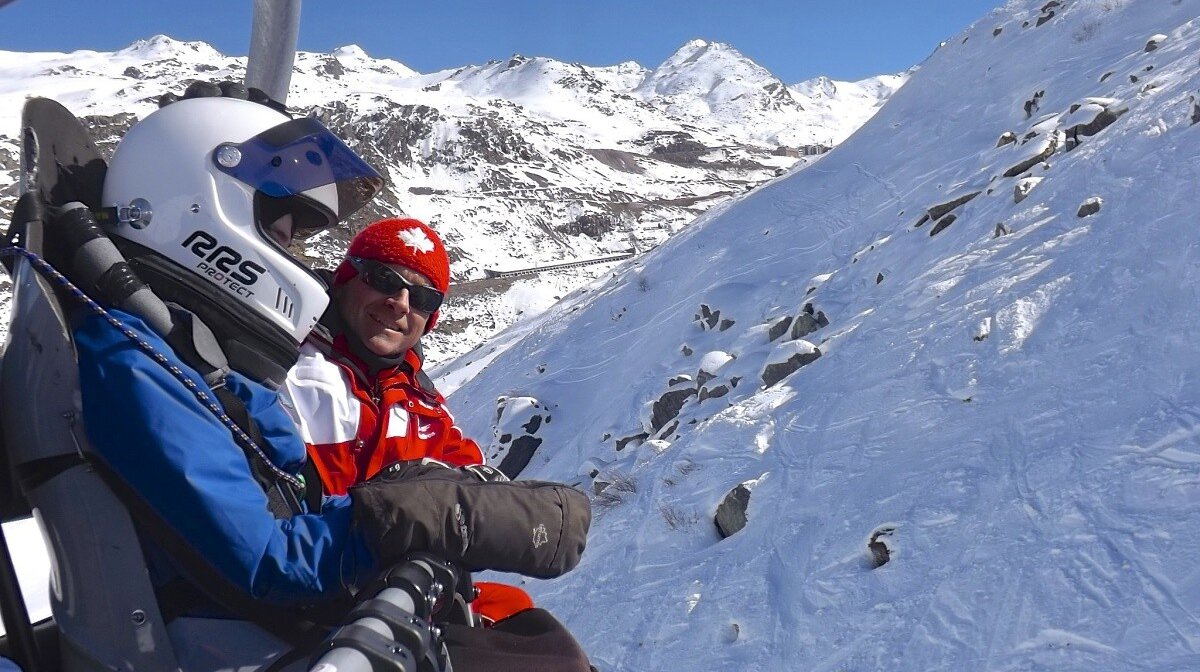 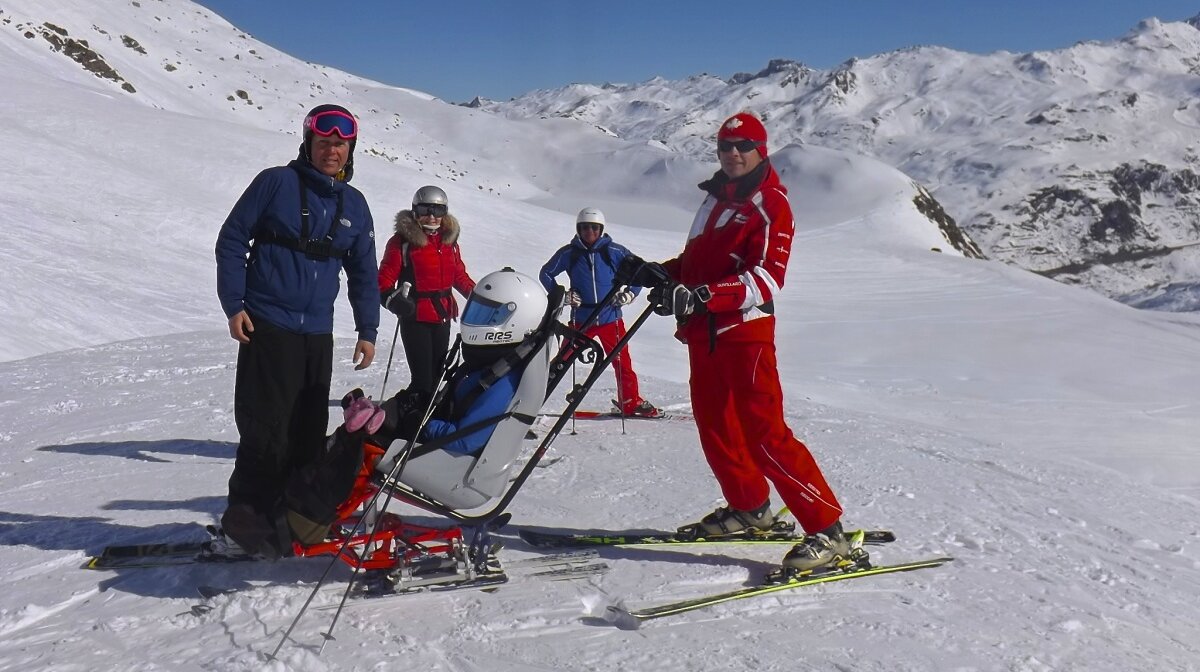 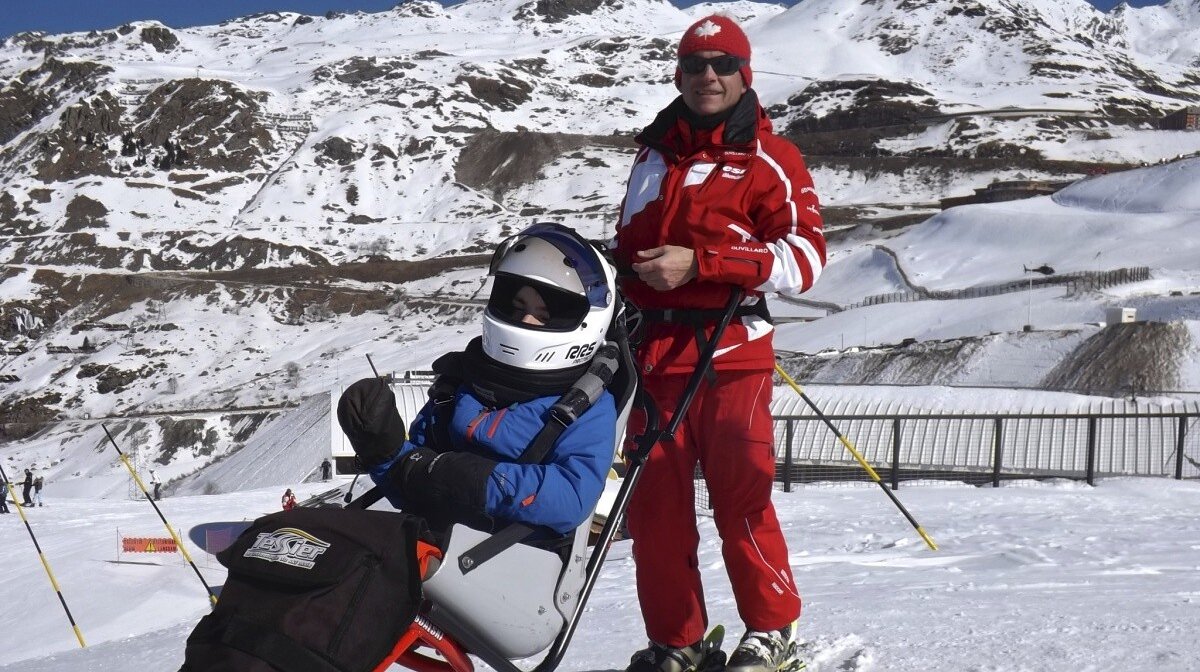 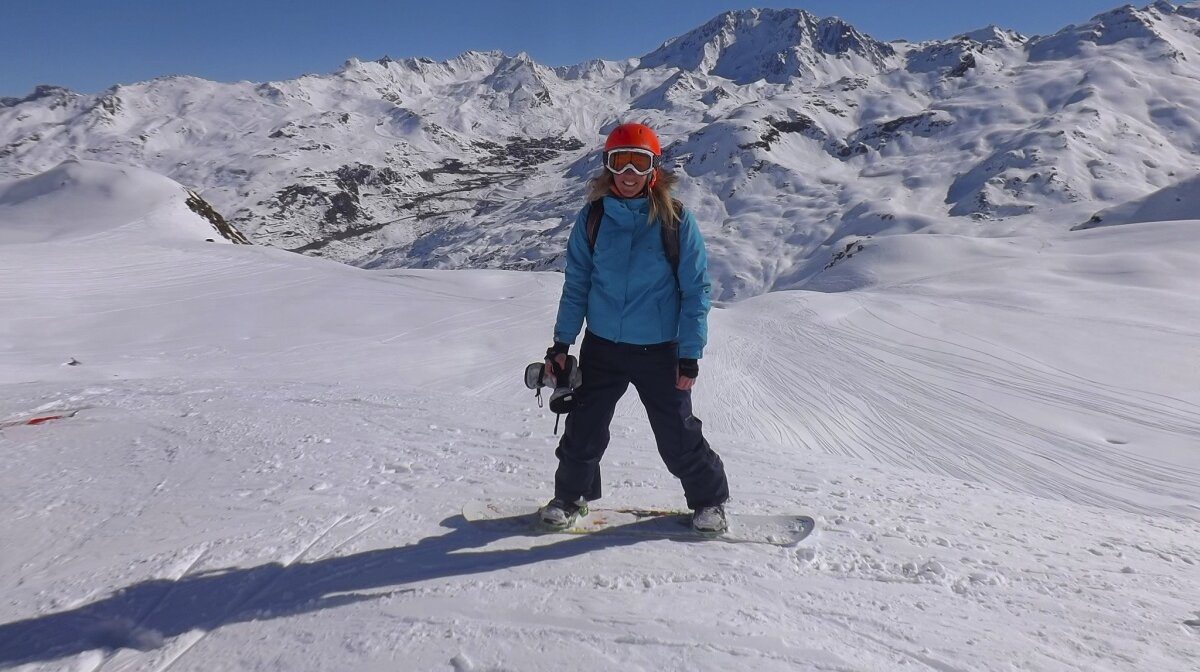 Heading down the ski cross!

Chairlifts are not a problem

Thumbs up from Stef!

Stef kindly waited all day for the snowboarder

Towards the end of last week I had the pleasure of accompanying Stefan and his instructor Thierry to get a better insight into accompanied skiing and wow what an inspiration they are!

Stefan aged 19yrs has now been skiing for around 10 years with the help of a sit-ski but prior to this had to miss out on family ski holidays due to his disability. His parents, Helen and Martyn, found it really difficult to leave him at home and were absolutely delighted several years ago when they spotted a sit-ski outside the ESF office in Les Menuires. Following enquiries they realised this could be a possibility for Stefan. Initially they ventured to Meribel but the following year they were teamed with Thierry in Les Menuires and have not looked back since.

Thierry grew up in the Belleville valley and has been an ESF instructor operating out of St Martin and Les Menuires for thirty years. He started assisted skiing in 1997 and met Stefan for the first time in December 2005. The one thing that stood out during our ski day was the fantastic relationship that now exists between Thierry and Stefan both on and off the slopes.

As Stefan attends college near London, he generally skis during peak weeks and availability of chairs can be limited. When Helen and Martyn were struggling for a Christmas present they opted for buying Stefan a sit-ski a few years ago. They have subsequently generously donated the chair to ESF to use when Stefan is in the UK.

I was really surprised to hear that whilst there are now around nine chairs available via ESF Les Menuires/St Martin they have actually been purchased by the self-employed instructors themselves. The generosity and desire for these instructors to make changes for disabled skiing is really inspiring.

One particular example being that initially they used a low loading type trolley to access the cabin ski lift in St Martin which was not ideal, difficult to lift and moved around a lot. Alternative lifts in the Three Valleys did not even have this type of trolley available meaning the instructor and family had to lift the chair in/out.

To solve the problem, a lift operator in St Martin designed a specific trolley with retractable wheels, making getting on and off the lift so much smoother. Thierry in particular has made a lot of changes over the years for disabled skiing. His efforts helped on this side of the valley by an instructor based in Val Thorens who has a child also using a sit-ski. Despite initial issues trying to locate the main decision maker to authorise the design, Thierry now deals with the head honcho directly and was able to get funding for the new trolley to be manufactured. An amazing effort that makes the start of Stefan’s ski day so much easier.

This is just one of many items Thierry has pushed for and as a result, the Three Valleys now have much improved facilities for disabled skiers. Not always at great expense, it can be anything from widening some of the lift access gates, to signs, to buttons for communication between the top and bottom of the lift station. The emphasis on the duo being as un-assisted at each lift as possible, not drawing attention or causing a fuss for the skier. I was so impressed to notice that when accessing chairlifts they don’t even need to slow down the chair at either end. The proficiency was just unbelievable.

Thierry is an absolute credit to ESF Les Menuires/St Martin and has an amazing can-do attitude. During lunch he explained that ESF had recently received a call from the parents of a three year old child who was blind. When asked if there was any chance she could ski, Thierry’s answer was a definitive ‘yes’.

This positive and unrestrictive outlook was highlighted particularly on the day I joined the family. At the top of St Martin I enquired where we would be skiing for the day, thinking I would just be joining for an easy mornings ski. I was informed we would be heading for the Lac de Lou off piste at the back of La Masse - something I have never actually ever tackled before!

As we set off I struggled to even keep Stefan and Thierry in my sights as they flew down the piste. It has taken Martyn and Helen some time to find a suitable helmet for Stefan that provides ample support, is comfortable and most importantly keeps his head stable when they speed about the mountain. He now wears a very cool racing driving helmet that they are able to attach to the chair meaning that Stefan is comfortable at all times. Both Stefan’s parents and his older brother, a previous ski racer, have tried out the chair and found it terrifying. For Stefan it is not a problem, he absolutely loves it and has no sense of fear!

On this particular day they expertly tackled the off-piste section whilst I scraped and rolled around behind on my snowboard, although I was told by the instructor that I was not doing so badly considering I had three things going against me; I’m English, a girl and a snowboarder! Following this we headed to Val Thorens and I saw Stefan and Thierry disappear down the ski cross track, there’s nowhere out of bounds for these two. At the end of the track Thierry lifted Stefan’s helmet visor to reveal a huge smile and laughter!

Thierry has made a real difference to the life of the Clatworthy family, as they now get to enjoy a true family ski holiday. Stefan’s parents have both tried skiing with the chair but prefer to ski separately as there is a great responsibility in guiding. Also, as with most children, thrill-seeking Stefan has more fun with an instructor than he would with his parents being in control!

Obviously hiring a private instructor for two or three weeks a season does come with a price and it is a downside that there is no funding or other options available to make assisted skiing truly accessible to all. I understand that there are currently around nine qualified instructors available for assisted skiing at ESF Les Menuires/St Martin and Thierry informed me that last year he spent nearly half of the season skiing with disabled skiers. Initial training only takes around five days but the quality of the instruction comes, in Thierry’s particular case, with his vast experience which truly shines through.

So, if you are wondering if assisted skiing might be a possibility for you, your child, your friend, your loved one I’d pretty much say that in the Belleville Valley it’s a yes!