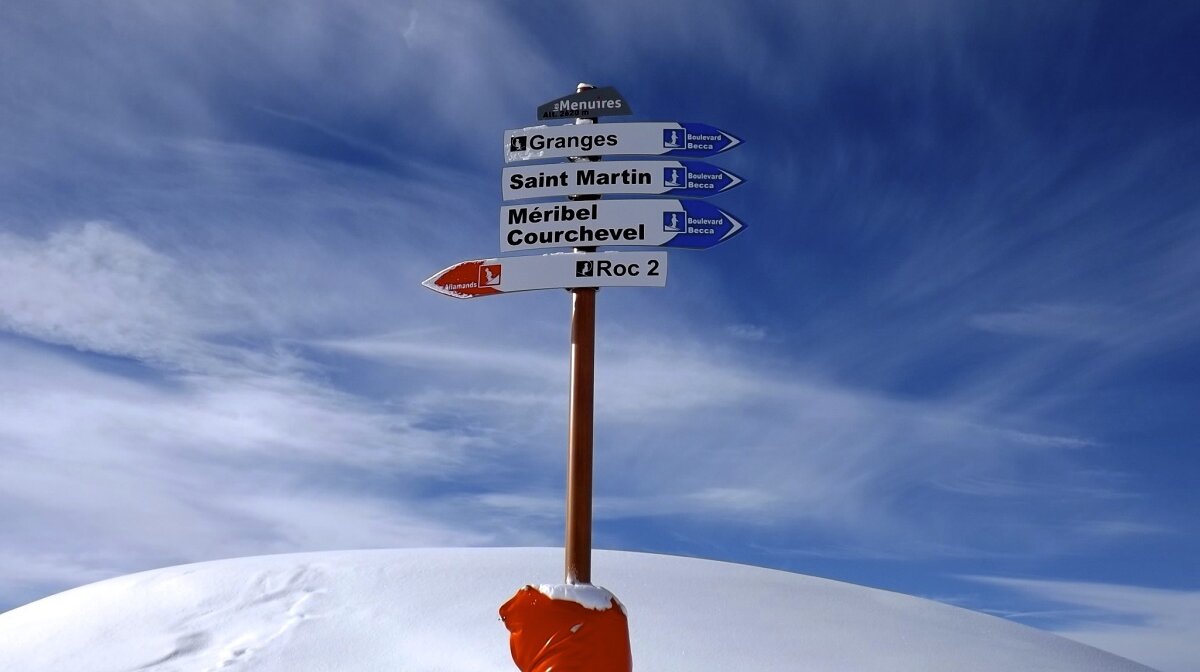 Our SeeValThorens.com snow reporter has gone to great lengths to plot a route that can be taken by a group of ‘plough/parallel' skiers with ease and will take you into each of the 3 Valleys. Although the itinerary begins and ends in Courchevel, it can be picked up from the point most convenient to where you're staying and followed in a circle.

It takes you into the Belleville Valley above St. Martin & Les Menuires and back up to the the Roc de 3 Marches at 2704 metres with one of the great views in the whole of the 3-Valleys. You then get to ski down the run ‘Grand Lac' followed by ‘Pelozet' which is the longest and best blue in the 3-Valleys with the added benefit of terrific views.

Courchevel Starting Point
• The departure point is from the Croisette in Courchevel 1850 - that’s the building which the 3 main bubble lifts leave from. Take the CHENUS bubble from here and exit the lift station at the top. • Put your skis on and ski down the blue Arolles piste and get on the Dou des Lanches chairlift. You are now on the ridge separating the Courchevel Valley (called the Bozel Valley) from the Meribel Valley (called the Meribel Valley!). • Turn a little left from the exit of the chair and about 50 metres away you will see a large wooden gateway saying Welcome to Meribel. • Go through this gateway on to the run called ‘Boulevard de la Loze’. • This is a long path which simply gets you deep into the Meribel Valley and I’m afraid is a little cold in the morning shadow – but trust me it’ll be worth it. Do not deviate right at the top onto either TETRAS or PIC NOIR. The Boulevard is basically straight. • Follow it on until you start getting back into sunshine and start crossing a couple of steepish reds. Keep going traversing across the mountain until you hit a blue run at right angles where you have to turn right. This is called Geai. All the runs funnel down past the top of the Rhodos bubble and onto the Rhodos piste, which brings you onto Rond Point – a large beginners area above Meribel which has many ways in but only one way out. So just feel your way down to the bottom end of Rond Point and get on to the DORON path to Meribel’s main lift area called La Chaudanne. Don’t worry if everything sounds a bit complicated at this point. There are helpful wooden signs at most junctions and just keep in mind ‘RHODOS followed by ROND POINT followed by LA CHAUDANNE’. All runs connecting these three places are blue so it doesn’t matter if you deviate a bit.

Méribel Starting Point
• At La Chaudanne, get on the TOUGNETE bubble (the one on the left); up the ramp and it’s a 6 person bubble. Then take the TOUGNETE 2 chairlift. You are now on the ridge separating the Méribel Valley from the Belleville valley at Tougnete (2,434 Metres). • Up to now you’ve been ‘getting there’. Now you’re going to start having fun! • From Courchevel, if you’re quick you’re now an hour into it. If you’re taking it easy or it’s busy, perhaps an hour and a half. • Ski along the ridge looking for the run GROS TOUGNE. Avoid the red run PRAMINT which drops off to the right. • GROS TOUGNE is a 1 km run which goes nowhere but to the restaurant Grand Lac. Time for a pit stop I’d say! Lovely sun deck & view. • After that, get on the very fast covered 6 man chair called GRANGES. This takes you back to the top of the ridge at a point called Roc des 3 Marches. There’s a good restaurant here and a little snack bar below with an unbelievable view. The food’s reasonably priced and pretty good. If it’s too early for lunch, turn right at the top and then right just past the restaurant down the run called ‘GRAND LAC’. This is very gentle, very long and the best in the 3 Valleys. It returns you to the bottom of the Granges chair and the Grand Lac restaurant. • Stop here for an early lunch or go just below and to the left of the restaurant down the run called PELOZET • This takes you to one place only (i.e. you can’t get lost!) and that’s the bottom of the St Martin Express chair. Just before you get to this point, which is the start of your journey home, there’s a restaurant called Corbellays on your left which is very good. • From Courchevel, you can be at this point at 3pm and still get home easily.

St Martin Starting Point
• Up the St Martin Express chair to the top of the ridge. Turn left along the ridge. When you see a sign to turn right, into the Meribel Valley onto the run called CHOUCAS. • Follow this down till you get to an area that has 2 drag lifts starting close together. Take the one on the right called CAVES. Left at the top across the hill on the run called GRIVES towards the Tougnete chairlift. Go just underneath it on to the green PERDRIX and into Mottaret.

Mottaret Starting Point
• Once you get right onto the flat bit that’s Mottaret, there’s a little passage in the left hand corner, behind a couple of ski shops and restaurants, signposted to Meribel via the run called La Truite • This gentle green takes you back to La Chaudanne. All the way across and onto the 12 man bubble in the middle called RHODOS. • Go up both stages; go straight out of the door towards the Rhododendron restaurant, keeping it on your left. Just ahead of you is the start of the Dent de Burgin chair which you should ski past and on down to the LOZE EXPRESS chair a few hundred yards down on your right. • This chair takes you through the woods and back to Courchevel! • Ski straight ahead from the end of the chair and you’re on the LOZE EST • If you started in Courchevel, then take whatever route you fancy back to your chalet from here. If not, follow the LOZE EST piste down to La Croisette and continue following the route from the top!

Find your way around with Piste Maps for Val Thorens.

Take a look at this year's Ski Lift Pass Prices and if you're not sure which one to buy, read our Guide for more information.