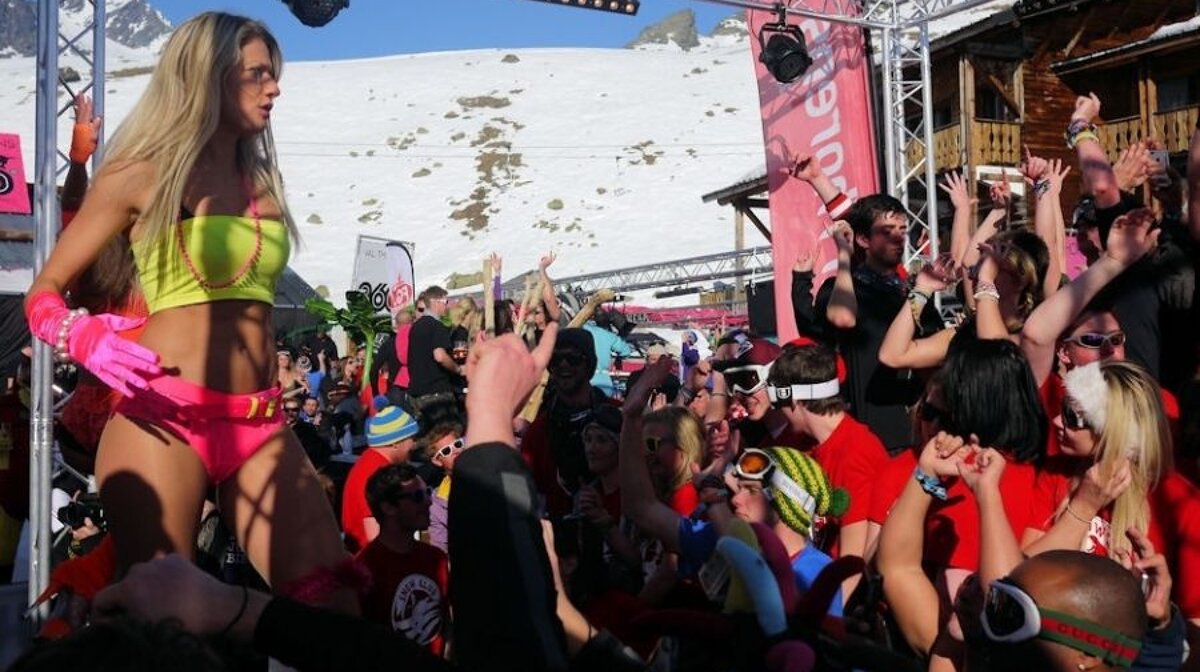 Val Thorens is well known for it's party atmosphere, both on the mountain and in resort.

The après gets going early in Val Thorens, whilst you are still on the mountain in fact! 360 Bar can be found at the bottom of the Moraine & Portette chair lifts, at 2400 metres. DJ's and bands keep the party going during the afternoon, and it's only a short ski back to town when it closes just after the lifts close. Another famous mountain party bar is the Folie Douce. This one is situated under the Plein Sud chairlift, and they have DJ's and live music from 2pm to 5pm.

Back in resort, Cafe Snesko guarantees a good time, with live music from 5.30 every night including crazy Danish folk music mixed with English sing a long classics! Don't get too close to the bar in any flammable fancy dress as they do have a habit of setting it on fire...this is a place to see how the Scandinavians really party!

Le Saloon could possibly be Val T’s best après-ski bar for those of you who want to party in a truly cosmopolitan environment. With a super friendly international team, this bar is a great place to mix. Big on live music during après ski there is always something going on. It's open from 3pm until late, with happy hours between 3pm and 5pm.

At Le Rendez-Vous in the Rue de Soleil, you can relax in beautiful Savoyarde surroundings. The Frog and Roastbeef on the other hand, is a more traditional British pub, with party music and plenty of dancing.

Further down the valley in St Martin, skiers gather at Les Grangeraies to pick up children from ski-school and then generally gravitate towards the Dahlia or Alp Hotel. Those without children to pick up tend to stay up the mountain to catch the last of the sun at Le Chardon Bleu, Corbeleys or La Loy, before descending, sometimes in the dark, back to the village. Apres-ski can be extended at La Loy or Corbeleys by booking an evening meal. Parties and groups are accommodated and don’t forget your torches for the descent.

Val Thorens is a resort which is very much geared up for young people and there is a wide choice of late night bars/clubs. In the main resort is the famous Malaysia Club on Place Caron, allegedly the biggest nightclub in the Alps. It's open until 5am. Klub Summit plays a wide mix of party music, from house hits, to cheesy disco and rock classics. It's open until 4am.

Alternatively, try a couple of the late opening bars. Le Baramix is a bar that holds regular theme nights - Latino, Reggae, and electro, techno and whatever else their resident DJ is playing that night. And Panda turns it's bar into a nightclub at 10pm, the music gets louder, the tables are cleared away and the drinks start flowing, through until 2am.

Les Menuires has two discotheques, Le New Pop in La Croisette and Le Leeberty in Reberty, as well as many lively bars. La Grotte du Yéti is one of a chain of bars that are popular throughout the Alps; frequented mainly by the Dutch they are known for their crazy parties and theme nights.

Saint-Martin has several bars, the Pourquoi-Pas being very popular and it is open until 1 or 2am. A late bus runs up the mountain on Fridays and Saturdays, but bizarrely, last season, it needed to be booked two weeks in advance!

Keep an eye on our Events Calendar for all the latest parties and events in Val Thorens.